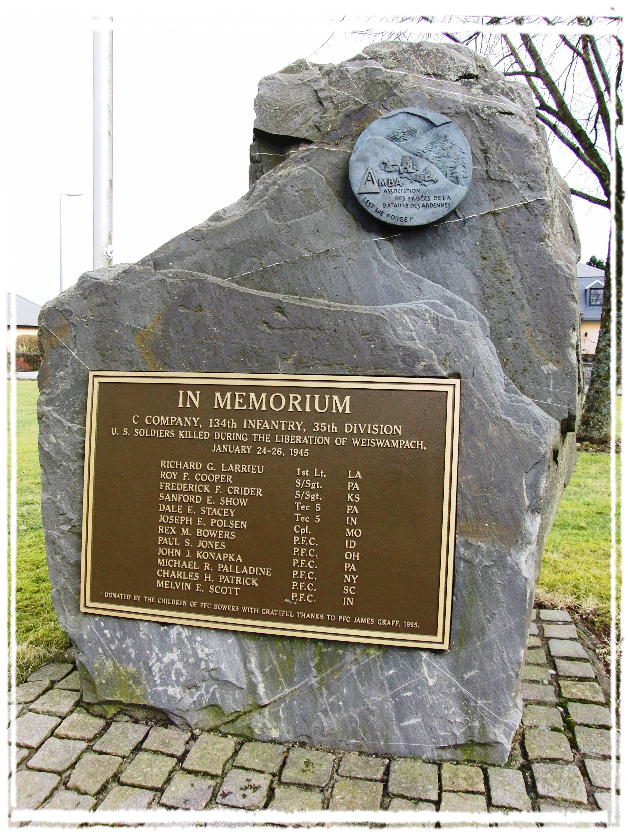 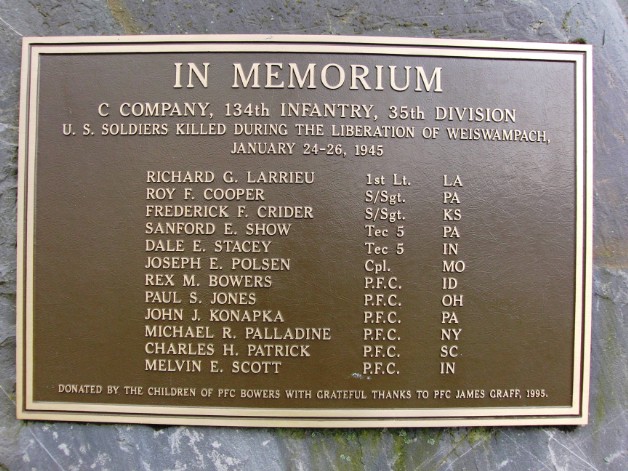 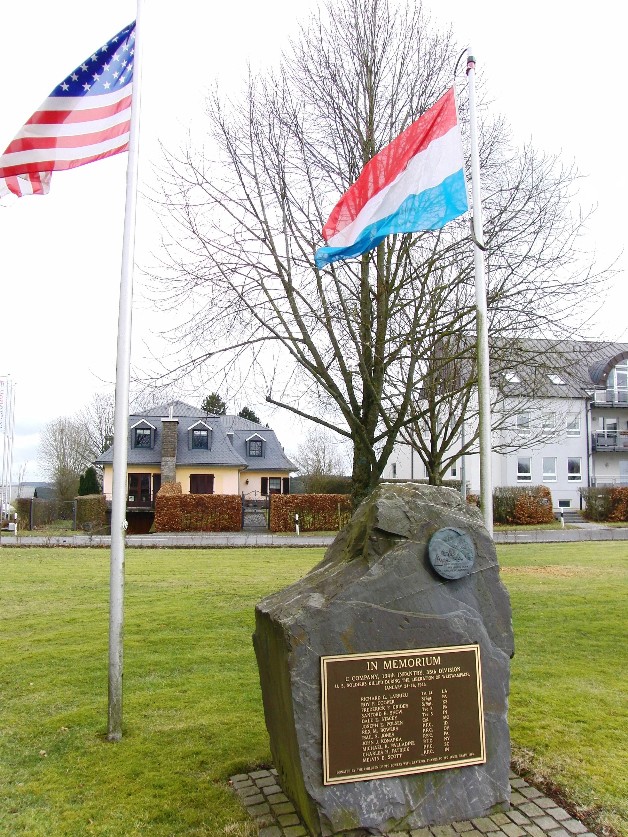 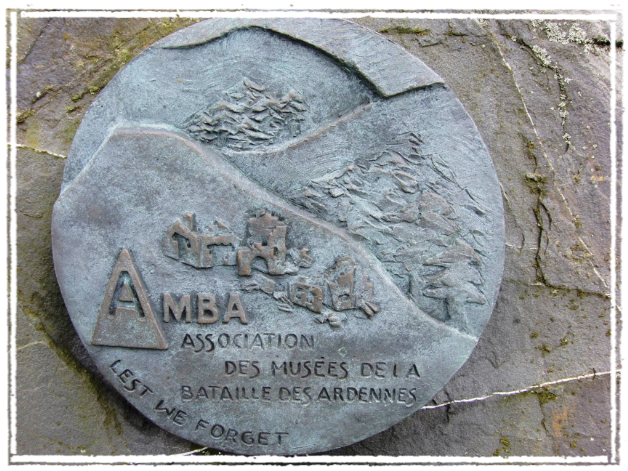 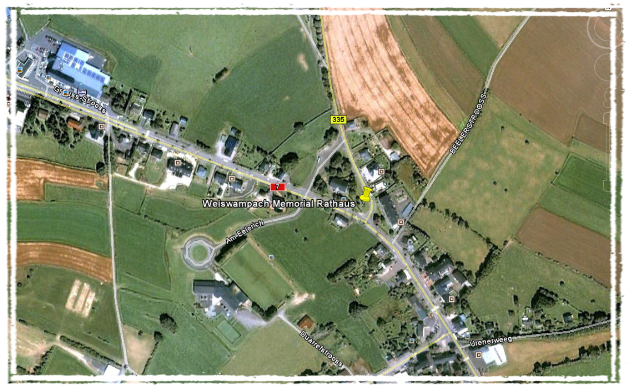 Over 50 years ago, January 24 - 26, 1945 to be exact, was fought a bitter battle at the approaches to and at the small Luxembourg village of Weiswampach. Task Force Craig consisting of the 1st Battalion, 134th Infantry, 35th Division and supported by tanks of the 6th Armored Division to which the 134th had been attached. This was the attacking force.

In C Company, 1st Battalion, 134th was a young infantryman, 25 years old from Idaho: Rex M. Bowers who was a father of three small children. He had joined C Company on January 8, 1945 after leaving the States on December 22, 1944. Rex was trained at Camp Hood, Texas for 17 weeks and after a ten day delay enroute home was shipped out of Boston, Mass. enroute to the ETO. Landing in Greencock, Scotland on Dec. 29 he went by train to Southhampton and across the channel to land on the beach at LeHavre on New Year's Day, 1945. By 40/8 boxcars to Metz and a 90 mile truck ride to Martelange, Belgium and into the line on Jan. 10 southeast of Bastogne near Lutrebois, Belgium.

The Bulge was fast disappearing, but as we members of C Company would find out, the Germans were still full of fight. When pressed close, they turned and fought like junkyard dogs. As we left the half-tracks which had been furnished by the 6th Armored we saw a group of German POWs and a corpse on a child's sled. Also a wounded tanker with a bandage over his eyes was riding in a jeep with another POW perched on the hood. We were soon moving out north of the village of Wilderdange across snow-swept fields while the tanks stayed on the Sky Line Drive. We came under severe small arms fire and in the process lost some men killed and wounded. By late afternoon we had secured shelter in some woods and were busy digging in. Next day we proceeded to advance towards Weiswampach. At first our only obstacle was the deep snow, two or more feet of it. As we came out of the woods west of the village we were subjected to heavy mortar, small arms and tank fire. Again and again we tried to advance, but were beaten down by vicious machine gun fire.

Sometimes in the afternoon of this, the 25th of January, Pfc. Rex M. Bowers was killed in action. Our company was obliged to dig in and later in the evening to fall back to a little town, which had been cleared earlier by the armor. I and another man slept with and old sheep and a couple of lambs. Next morning we again attacked the town from the east and our only loss was one tank to American mines, which had remained, buried in the snow for 6 weeks since the Bulge had begun on December 16, 1944. We were relieved on the afternoon of 26 January by elements of the 358th Infantry, 90th Division. Germany was a stone's throw away over the Our River. C Company had lost on officer and eleven enlisted men KIA, 21 WIA including 3 seriously wounded and 5 enlisted men who were lost to frostbite. C Company had sustained 199 casualties during the month of January, 1945, including 29 KIA and had received a total of 119 replacements - a sad month to say the least.

Forty-nine years were to pass when I got a telephone call from a lady in Denver, Colorado. She asked me, as the Secretary of the 134th Infantry Association, if I could help her find anyone who might have known her father who had been killed in Luxembourg in 1945. I asked some particulars and discovered she was Rex Bowers' daughter. He and I had joined C Company together although I really didn't know him. After a year of corresponding and attending a 35th Division reunion in Topeka, Kansas, Marilyn and her husband David wanted to erect a memorial to her dad and the rest of the men killed with him. With help from Mr. and Mrs. Camille Kohn and Mrs. Tillie Kimmes, who are leaders of the C.E.B.A. group in Luxembourg and, of course, help from the good citizens of Weiswampach we decided on a memorial plaque. It was cast in California. The C.E.B.A. people contacted the village fathers and they erected a seven-ton stone, mounted the plaque and put up matching flagpoles and an eternal light.

On April 1st, 1995 David and Marilyn Jensen, her sister, Diana Schlund, and my wife Alice and I went to Weiswampach, Luxembourg to dedicate this plaque. We were greeted by a great multitude of citizens of the village and surrounding area - the school children, the fire brigade with their youth auxiliary, municipal band, U.S. Embassy officials, city fathers, the lady mayor, the priest, and a great turnout. Also in attendance was Katie Kremer, a native of Weiswampach, who lived there during the war. She now lives in Calumet City, Illinois and we are fortunate to have made her acquaintance.

We dedicated this memorial to the men killed here, but really to all the men of the 35th killed in 10 months of combat in the ETO. You cannot believe the reception they gave us. After the memorial service in the Village Square, we had a huge reception in a large tent erected for this ceremony. Here we met two men who were 16 year old teens when we attacked the town. They told me that the Germans had 20 tanks in the town, but only enough fuel for 3 to be operational. They were waiting for a resupply from across the Our River during the night. They had pulled out when we attacked on the 26th, except for one disabled tank, which was burning, when we entered the town. They also told of the death of 2 civilian women during the attack. A Mrs. Hoffman also lost her right arm.

The Bowers girls and their brother knew nothing about their father's military history, because of some unusual circumstances. I, James G. Graff, of Middletown, Illinois, was a BAR man and platoon runner during my term of service in C Company, 134th Infantry. I came home from overseas with them and was discharged out of the 5th Division in April 1946. My wife Alice and I farmed for 43 years and have been married for 53. We have 4 children and 11 grandchildren.